Karraguls have an extremely complex language system involving many different parts of the body, which are invoked in different social situations. Voice, wings, and even eyes are used (not even counting instinctive body language). Three main methods are recognised:

As the crests are solid, unmoving structures, there isn’t much control over the sound. Both species have only a small repertoire of these calls, most of which are instinctive from birth.

Neighbouring communities may develop additional calls, utilising pitch and call length differences, to convey basic messages to each other.

Similar to human speech. As the name implies, the sounds used in this speech do not carry very far, as the crests are not utilised when speaking. Due to the immobility of their “beaks”, they cannot make “b” and “m” sounds, but use a lot of (insert sounds here). It is most commonly used during large social gatherings.

The most rapid form of communication by far, used in one-on-one settings or in small groups. Using chromatophores in the webbing of their wings, they flash patterns that change in tenths of seconds. Whole sentences can be conveyed in the time it takes to say one or two words.

Patternspeak is also the form of language most commonly adapted to writing. Characters are contained within triangles, simplified symbols of wing webbing. Writing itself, however, is rare as both reading and writing are extremely laborious processes when compared to the speed of “live” patternspeak. It’s mostly limited to carved migration markers and warnings; important messages that need to survive for long periods of time.

A rare, but noteworthy form of Karragul language. It is commonly used in a very basic way, and appears to have evolved from the etiquette of closing certain pairs of eyes when addressing others. However, a handful of isolated communities have developed this into a form of language used similarly to patternspeak; a rapid-fire visual language created by different combinations of shut eyes, or even waves of blinks in different directions.

Houses are constructed out of buoyant wood, and may be anchored down to the riverbed or allowed to float, depending on the community. In either case, they will still be latched to the central “trunk” of the giant fungus populating the area. Villages tend to resemble a lollipop in shape, with a circle of houses and a landing strip.

Due to the open nature of their society, houses are directly connected to each other and there are no doors, only waterproof flaps that are rolled down during rain or at night. 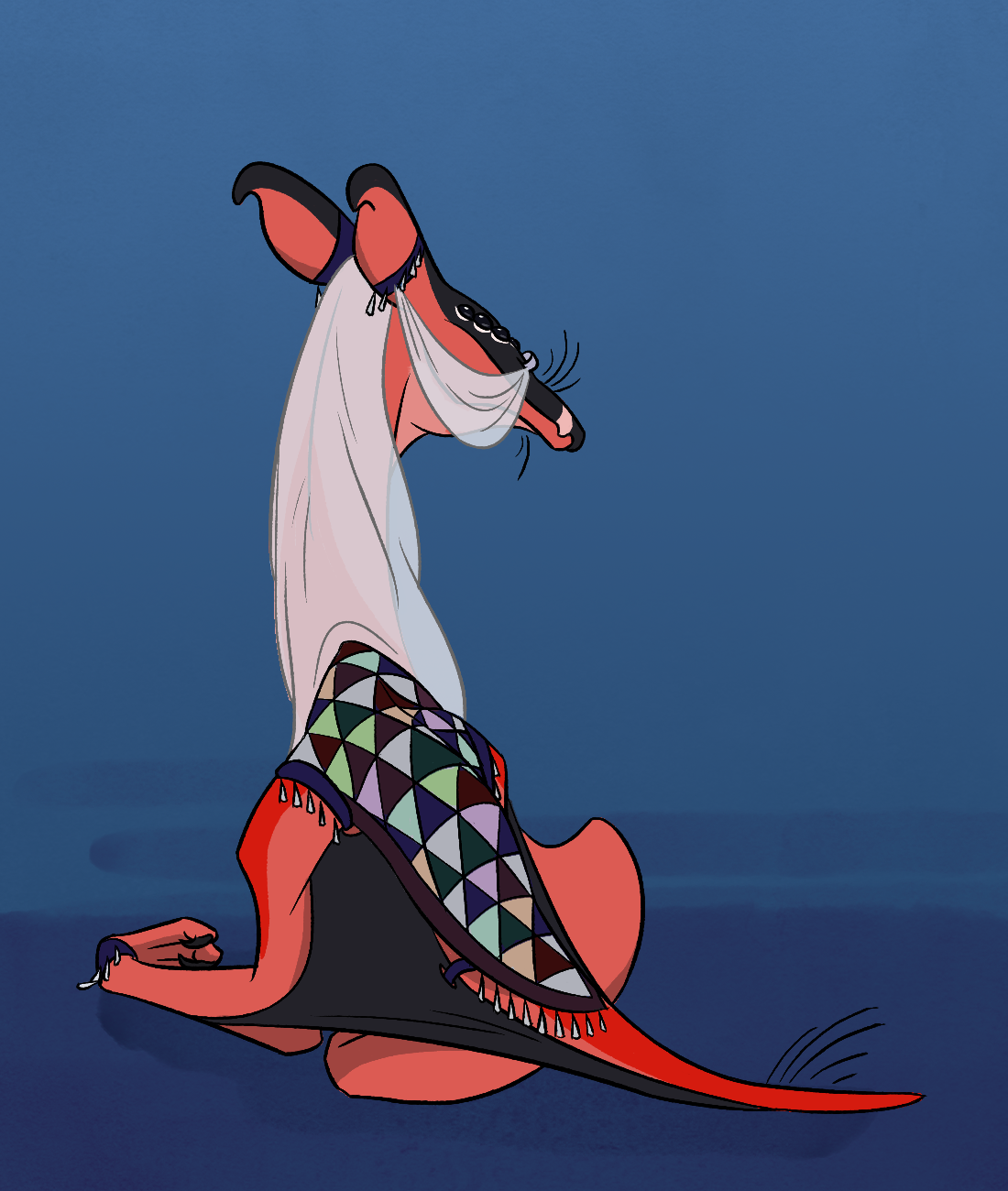 Seated Karragul with a quilted backpiece.

Most clothing is not worn out of modesty, but more as decoration. You wear clothes as a display for other people; when alone, or sleeping, they're not neccesary. Highly patterned pieces that cover the back like a display, while the limbs and belly are left uncovered, is the most popular form of clothing. Patterns are high contrast, as they only see shades of grey on the visible light spectrum. Different colours are hard to differentiate, and may appear mismatched (but sharing similar values) to those with colour vision.

Headgear is common for both courtesy and modesty reasons. It is considered rude to look at someone head-on, as this implies the other person is being viewed as prey. In one on one situations this is easy enough to avoid; the two parties simply sit abreast while speaking. However, in larger social gathering it is hard to avoid an accidental look, so these eyes are kept closed. Depending on the culture, the back eyes might also be closed, or both pairs might be physically covered. In conservative cultures, ideas about the facial mask and crests being too sexual most of the year often blends with the need to cover the eyes. In this case a near complete face shield is adopted.

Examples of headgear from least to more conservative cultures.

Karraguls depend mainly on the aquatic organisms ("fish") living in the waters around their homes, but also supplement their diet with flesh from the giant fungi they latch their homes to.

Wild fish are mostly caught by mouth and foot - stunned with calls and then grabbed. The first few catches are allowed to be eaten, while the rest are stored in a waterproofed basket which is brought back to the village. Some fish species are farmed as well, kept in nets surrounding the houses.

Fungus flesh was originally collected by mouth as well, but it is now scraped off with a variety of tools depending on required shape. Scoop-like tools remove large chunks to be used as flotation devices and food. A large, flat chisel is used to remove a thin but wide layer that can be tanned and used as a textile. Harvesters hang from the sporangium with their strong arms, holding the tools in their dangling feet.

Living in a hot, humid environment means food can go rancid very quickly, so preserved foods are common. Pickling in acid is one way, but the preferred way is sand or mud storage. Fish are wrapped in a porous cloth, then buried in a pot of salt-embued mud. When dug up several months later, the cloth is unwrapped, stray particles washed away, and a delicious salted fish is the result.