The first shifters arose when other animals, seeing how much more comfortably humans lived, escaped the harsh wilderness by becoming human themselves and assimilating with local communities.

The process of animals joining the human community continues to this day, and likewise, many shifters decide that human life isn’t for them and return to the wild. “Fresh” shifters are easily identifiable, often retaining clear animal features, difficulty speaking but clearly understanding, and feral behaviour. There are organisations specialised in locating these individuals and helping them integrate into human society. Depending on the country, if they’re not found by a friendly organisation first, they can be treated harshly or even imprisoned.

All shifters are born with the ability to shift between a base animal form and a human form. It is inherent, and as natural to them as breathing. Transformation is smooth, quick, and painless, without any signs such as a “poof” or shining light. This is where they get their in-universe name - slipshape - as they slip between shapes as fluidly as water. Forms are not static, and can influence each other depending on the time spent in them, clothes worn, and other factors. They can shift isolated features e.g. a tail in human form, but usually operate on a “sliding scale” between both forms.

Shifters are able to retain clothes and accessories between transformations*, which influence their colour in animal form. Markings will take the vague positions and shades of colours on their clothes, but exact patterns, logos etc. tend to bleed unless consciously focused on. Small patches of colour may also disappear. It is not, however, a one-way street - over time, if certain clothes are constantly worn while transforming, the colour will leech back into their human form. This is the case with Gold, who's red jacket turned his fur red, and subsequently, his human hair as well.

There is also the question of mass. Shifters are not bound to keep their exact mass between forms, but there is a general limit to how big or small they can get (though this differs from person to person). Most invertebrates are off the table, as are giants like elephants and whales. It is easiest to maintain a form that is of similar mass to their human self.

*Essentially, anything touching their skin can be treated as an extension of the body.

It isn't just colours which can reverse influence a human form. If enough time is spent in animal form, features will be retained as a human too. These traits vary between all individuals and range from plausible human variation, such as differently shaped teeth, to very clearly animal traits, such as patches of scales or feathers.

Shifting for long periods of time can also influence the mind. If enough time is spent in animal form, a shifter will gain more instincts and start to lose levels of consciousness, essentially retreating into their own head and becoming more like a regular animal. If more time is spent in human form, they will lose instincts and find it difficult to survive should they return to the wild. Intrusive thoughts of human morality and etiquette can also negatively affect them. However, since there is a sort of push-and-pull between both forms, spending time in another form can tip the balance back, or even cause a complete 180. 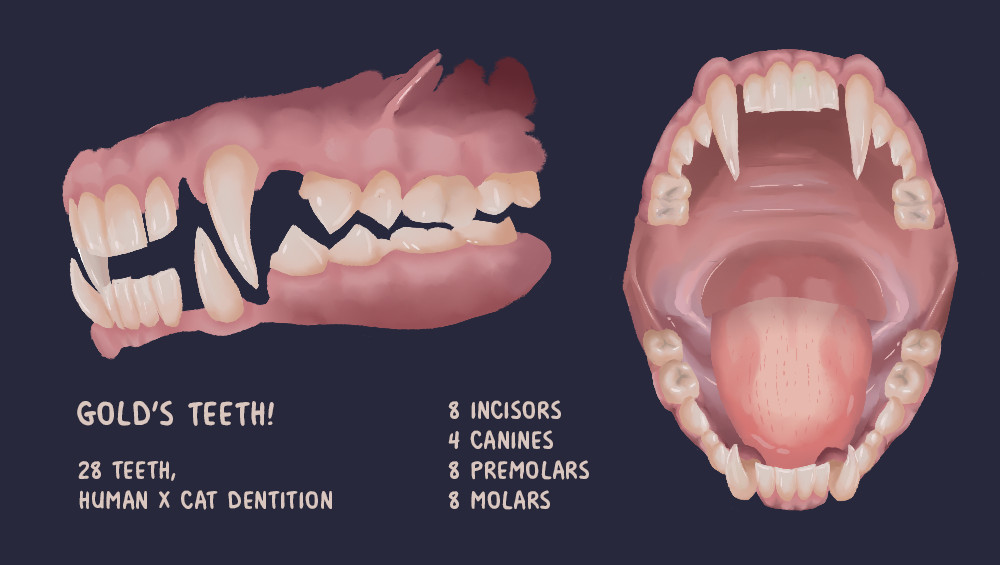 Gold demonstrating "feature leeching", having feline canines and premolars even as a human.

The Myth of "True" Forms

Shifters do not have a “true” form, only a default; their human and animal forms are equally “true”. Contrary to popular belief, when a shifter dies they have nothing to “revert” to, and they cannot be forced out of one form and into another. The most that can be done is to lock them in their current form by weakening them in some way, or by physical constraints e.g. a cat in a small cage simply doesn’t have the space to become human.

As stated earlier, all shifters have a base animal form along with their human one - this is thought to be their ancestral form. Features of said animal can show through involuntarily with strong emotions, and can be accessed easily and instinctively. Other forms can be acquired, but take time and practice to learn. The chosen form must also be observed and interacted with in person. In essence, the shifter is learning to sculpt their own bodies into an unfamiliar shape. It is a messy and difficult process. Many do not learn more than two extras.

During the initial process, shifting isn’t exactly painful but can result in discomfort, wild anatomical errors, and getting “stuck” in between. This is usually the result of panic and can be reversed by calming down. After the new form is completely achieved, shifting will still take longer or experience lag/lack of synchronisation between body parts, with some parts changing faster than others. Over time, it can eventually become as fluid as between the base and human forms. These alternate forms also can’t be passed on to the next generation, whereas the base form always will.

Shifting into an existing human (as opposed to the shifter’s own human form) is considered taboo and a criminal offense, both within and outside the shifter community. It is effectively a form of identity theft, and though it is very rare, the possibility of shifters doing this is often used as fear mongering in the human community. Altering a human form to be unrecognisable can also be stigmatised, depending on the region. Small cosmetic adjustments are fairly common however, akin to makeup.

There are wildly different views on changing sex characteristics within shifter communities. Generally speaking, shifters arising from animals with little to no sexual dimorphism are more accepting of changes. To them, it’s perfectly reasonable to be uncomfortable with human dimorphism. On the other hand, high dimorphism shifters tend to have strong gender-sex attachments and have trouble understanding why somebody would want to change. This is not a hard rule though, and of course can be influenced by the human society they inhabit as well.